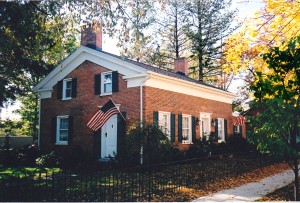 At the corner of Franklin and Miami streets in Tiffin stands a tidy brick home that is more than 160 years old. Phil and Rayella Engle purchased the house in 1996 and have done major repairs and upgrading to transform it into a hospitality house. Now renamed the Historic Erastus Bowe Inn, the home can be rented for overnight stays, parties, baby or bridal showers, small dinners, weekend retreats, meetings and other such gatherings.

The Red Hat ladies from Kiwanis Manor visited in August 2010 for lunch and a program about the site by Rayella Engle. One of the women, Hazel Scalf, grew up in the house and had made a drawing of it. Rayella gave guests some background about the man who had built the home and about the renovation process. 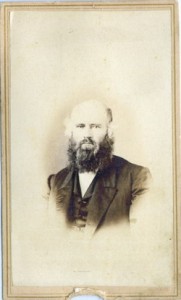 “Erastus Bowe was a man who served in the War of 1812 with Admiral Perry. During that time, he came to this area and to build Fort Ball, which they built in 25 days. There is a picture of Fort Ball over the fireplace, a picture that was done by my sister many years ago,” Rayella said.

The history books say Bowe returned in 1817 to look over the land in the area. Soon after, he hired two men to help him build a double-wide cabin called the Pan Yan. One side was a residence and the other was a tavern and inn. It is believed to have stood where North Washington Street and Frost Parkway now intersect.

Once the residence was built, Bowe returned to his birthplace, Delaware, Ohio, to fetch his wife and infant son, Erastus Guilford Bowe. The son became a Seneca County citizen who bought the property and built the brick house that still stands at Franklin and Miami streets. Engle said records differ on the date the house was built. Some say 1837 and others say 1847. Either way, it is decades older than the (former) Seneca County Court House.

“The bricks for the outside of the house came from Buffalo (N.Y) by boat to Sandusky and from Sandusky by pack mule to Tiffin. It was not Tiffin at that time. It was the Fort Ball area,” Rayella said.

The lean-to section on the south side was built at a later time with locally-made bricks. In 1950, the King family bought house and moved the stairway from the dining room to the living room, which originally was a small bedroom or “birthing room.” The Engles visited the Edison Birthplace in Milan, Ohio (built in 1842) to see the similarities between the two structures.

“This house has the exact same footprint as the Thomas Edison House in Milan, and if you look at the picture in the dining room, it looks almost identical to his house,” Rayella said.

The Engles purchased the house from the John Baker Family. Rayella said “we bought it with our hearts and not our heads.” Phil Engle said he knew the historical significance of the house, and he feared the next buyer might demolish it. The house had been vacant for some months before the Engles started working on it.

The couple decided to replace the roof first and add insulation to the walls. The south end of the house had been extended and made into a garage that was in disrepair. They removed the garage, moved the wall back toward the house and installed a modern kitchen. A partial basement existed below the house, but Phil and another man dug out the rest of the space by hand.  They used a conveyor device to lift the debris up to the street to be hauled away. The lower level has become an office and TV room with two sofas, a washroom, and hookups for computers.

Upstairs, the Engles converted three small bedrooms and a bathroom into two larger rooms, each with its own full bathroom. One has a jacuzzi. The other has a shower.  Each carpeted room has a queen bed with a quilt and coverlet. One room has chest of drawers from the maternal side of Phil’s family.

“His great grandmother, at the age of 11, walked beside the Conestoga wagon all the way to Seneca County. There wasn’t room for her to ride in the wagon because there was … this chest inside,” Rayella said.

The original fireplace in the living room was restored to working order. Ernest Wahl, a retired mason, rebuilt the existing fireplaces and exterior walls. He also installed the new fireplace in kitchen. Wahl also installed patio and steps leading to the lower level of the back yard.

A metal fence spans the Franklin Street side of the home and another runs along the east side of the lot, behind the house. Rayella said Phil, a retired funeral director, had spotted the fence years ago, bought it and stored it in his barn.

“He was at a graveside service at Rockside Cemetery in Bloomville. He happened to look over and on a big trash heap was all of this metal fencing. So after the funeral, he went over and talked to the sexton who was there and asked what they were going to do with it,” Rayella said.

It was going to be scrapped, so Phil and Mr. Valentine from Melmore made an offer and purchased it. When they bought the Bowe house, Rayella said they pulled the fence out of storage. She said the gate is the original cemetery gate. Sarka Sheet Metal replaced and repaired the segments that had deteriorated. Some pieces also were used to surround the patio.

The Engles added air conditioning to make the house comfortable and to preserve the improvements they had made. The kitchen has all new wiring and plumbing and modern appliances, but the refrigerator and dishwasher are disguised to look like cabinets. Ralph Smothers, Jr., helped find cabinets that would work in the space available.

I designed the kitchen. I have a wonder carpenter, Dennis Wise … If I drew it, Dennis could build it,” Rayella said.

The chandeliers over the sink and table in kitchen are antiques, but those in the rest of the house are reproductions. The kitchen floor came from the Engle farm. The planks were made from a walnut tree that came down in the 2002 tornado. The floors in the other two first-floor rooms were sagging badly. Wahl jacked up the joists from the basement, but he didn’t believe the floor could be saved. Rayella had other ideas.

Wahl was able to remove the boards, turned them over, sanded the undersides and finished them to form the new floor.

At some point, the home’s back porch had been enclosed and used for a laundry area. The Engles removed the enclosure and installed French doors for a view of the back yard. 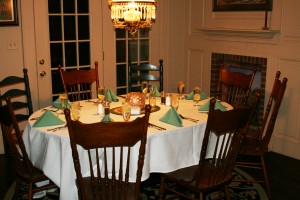 To furnish the house, the couple selected some antique pieces to complement the period of its construction. They moved a table they received as a wedding gift to the dining room. The table in kitchen belonged to Phil’s father. Rayella parted with a hall tree from their home and stripped “the most awful shade of gray” paint from a hutch she purchased years ago at a sale.

“The top doesn’t really match the bottom, and I think the carpenter said there are seven different kinds of wood, but I like it,” she said.

An 1834 map of Seneca County and reproduced paintings of historical scenes done by artist Robert Griffing decorate the basement office. Because the Bowe family had come to Ohio from Pennsylvania, one painting depicts a scene near Pittsburgh with William Penn. Another portrays settlers traveling with Daniel Boone through the Cumberland Gap from Kentucky into Ohio, because Rayella’s family came here by that route. The fireplace screen in the dining room features a painting of the house by local artist, Marilyn Kisabeth.

The Engles have incorporated elements of the past and present to preserve a piece of local history. They call it “a bed with no breakfast.” Phil said it already has housed numerous guests, including historical consultant Franklin Conaway and ministers for two area churches.